The Military History Of Wayne County, Part I 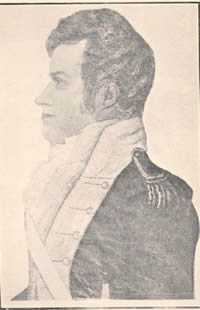 Since much of history is measured by the history of wars, it seems appropriate to tell the story of Wayne County's military history. It begins with the French and Indian War of the 1750s, which was not a war between the French and Indians, but rather, the main combatants were the French against the English, with Indian aid coming on both sides of the conflict. The war began in 1754, and with its end in 1763, came the end of French power in North America.

Wayne County's role in the war was in the form of serving as a campground for both the French and Indian armies. From written records, it can be shown that Sodus, Pultneyville, and probably other points along the northern border of Wayne County, served as stopping places for the French and English armies. Sodus Point was one stop made on the English Campaign of 1759 that ended in the capture of Niagara from the French. Then, there is also the story of the Blockhouse of Clyde.

The Blockhouse at Clyde

The village of Clyde was first known by the name of Blockhouse from one built there by Indian traders at an early date. The blockhouse, it is thought, did serve as a fort. Local historians have differed as to the origin, date of erection, and history of the old blockhouse, but it is very possible that is was constructed about 1756, during the French and Indian War. It has been said that it was originally a fort, where inhabitants of the area congregated for protection from the Indians. Since there were no settlers in the area at the time, it is not likely that this was the case. It may have been built to provide protection for travelers moving from Lake Ontario to the Indian villages. Accounts by early settlers indicated that the building was two stories high, the upper projecting over the lower. In the floor of the upper story were portholes, through which gunfire could be directed. It is thought that during the Revolutionary War the building was used as a depot for the storage of goods smuggled to and from Canada.

The blockhouse was destroyed by 1805. There is no record about how it came to be destroyed. Today, a replica of the blockhouse stands outside the village of Clyde.

The only connection which Wayne County can be said to have had with the Revolutionary War arises from the fact that there were among the early settlers a considerable number of soldiers who had been engaged in the struggle for independence. Before the Revolution, Western New York had been the land of the Iroquois Confederacy, but between 1783 and 1794, Indian treaties were signed which opened up the area to pioneers and restricted the Indians to reservations.

Many of those who came to settle in Western New York had been part of the Sullivan Campaign of 1770, which had as its goal the destruction of Indian power. Having seen Western New York, their appetite to own a piece of land in the area had been whetted. Settlement in the Wayne County area began early in 1789 with many of the early settlers being veterans of the American Revolution. Nicholas Stansell and john Featherly had also accompanied General Clinton on the Sullivan Campaign into the heart of the Iroquois territory and probably returned with stories of the rich soil and beautiful scenery. The Stansell and Featherly families arrived in May of 1789 at what is now Lyons and settles for a while to the south of the Clyde River. Nicholas Stansell eventually settled in what is now the town of Arcadia and died there on December 11, 1819. John Featherly and his wife, Mary, moved to Rose and are buried in York Cemetery, Huron. John Featherly died about 1843.

Other Revolutionary War soldiers came to claim bounty land in the Military Tract which, in Wayne County, included what is now Galen, Savannah and parts of Wolcott and Butler. The military lands were tracts of land given to officers and men who served in the Revolutionary army from the state of New York. The Military Tract was located east of the Pre-emption Line and consisted of 28 townships given classical names.

It is not known exactly how many veterans moved on to their bounty lands, though it can be assumed that the actual number was small. Men who did "draw" bounty land and settled in the region include:

This is only a fraction of the many Revolutionary War veterans who made their home in Wayne County.

Others settled elsewhere than on the military lands. Lemual Spear came to Palmyra in February 1790 and settled near Palmyra; Lemual Durfee, with ten other family members, also settled near Palmyra. He had served three years in the War. John Swift, founder of Palmyra, also served in the Revolution. In 1789, John Swift and Colonel Jenkins purchased a large tract of land. Swift moved to the area in 1790 and became prominent in the local militia, serving as Brigadier General later in the War of 1812 on the Niagara Frontier. Colonel Peregrin Fitzhugh entered the Revolutionary War as Lieutenant of the Third Regiment of the Dragoons of the Virginia Continental line. Two years prior to the end of the war, he was appointed Aid-de-Camp to General George Washington. Colonel Fitzhugh died in 1810 and was buried at Sodus Point. Aaron Brister, a fugitive slave, who settled in Palmyra about 1805, served in a Virginia regiment from 1777 to 1779 and was awarded a pension in 1818. He died in 1821 and was buried in the cemetery just to the west of the present Palmyra town line.

Over 100 Revolutionary War veterans are buried in Wayne County. Countless others moved on to the West after stopping for a brief while in the County.