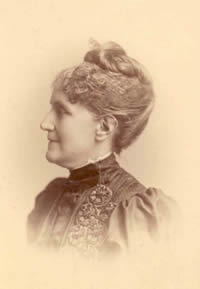 Amendment XIX - The right of citizens of the United States to vote shall not be denied or abridged by the United States or by any state on account of sex. Congress shall have power to enforce this article by appropriate legislation.

Originally the qualifications for voting were established by each state. Traditionally, only white, male property owners were allowed to vote. Federal guidelines regarding qualifications for voting first came into effect with the passage of the 14th Amendment to the United States Constitution in 1868. This amendment states that every man over the age of 21 be entitled to vote. Voting rights were next mentioned in the 15th Amendment, passed in 1870, which states that the right to vote will not be denied on account of race, color or previous condition of servitude. The 19th Amendment, ratified in 1920, states that the right to vote shall be granted to women.

Lisette C. Hotchkiss Parshall is one of the women honored as pioneers in the Women's Suffrage Movement. Her name appears on the "Suffrage Memorial Tablet" placed in the New York State Capitol Building in Albany on November 21, 1931. Although Mrs. Parshall did not live long enough to see the adoption of the 19th amendment to the United States Constitution, which gave women the right to vote, she saw and experienced the progress of women toward equality.

Lisette Parshall had a very modern outlook on life. She and her children traveled extensively in Europe, as well as Russia and South America, which was a very courageous and farsighted adventure for a widowed mother in the 1880's. She encouraged her children in the pursuit of the arts. Tudy became an accomplished weaver of tapestries and DeWitt became a famous landscape artist.

After returning home in the 1890s, Mrs. Parshall became very interested in the Women's Suffrage movement, as well as social and educational improvements. She had modern and progressive ideas and was a very inspiring leader. She was the first woman to be elected to the Lyons Board of Education and was president at the time of her death in 1913. In 1902, Mrs. Parshall helped organize the Political Equality Club (which eventually became the Lyons Civic Club after much opposition to the name). She represented Lyons, as well as Wayne County, at many conventions and suffrage meetings across New York State. At Mrs. Parshall's request, Suffragettes such as Susan B. Anthony, Carrie Chapman Catt, Dr. Anna Shaw and Harriet May Mills came to speak in Wayne County. She was enthusiastically and whole-heartedly an advocate for the Women's Rights Movement.