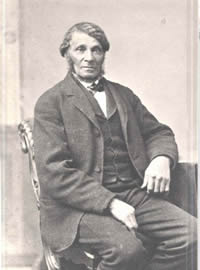 Job Travice came to Galen, in eastern Wayne County about 1847. He purchased his farm from Alonzo Hunt near what was called Pilgrimport.

In the 1850 census Job Travice's farm of 86 acres listed as having a cash value of $4,000 - a sizeable farm at the time. During that year Mr. Travice's farm had produced wheat, Indian corn, oats, Irish potatoes and hay. In addition he had also produced 300 pounds of butter. His livestock consisted of horses, milk cows, sheep and pigs.

In 1853, Job Travice's farm was one of only three farms in Wayne County to compete for a premium from the New York State Agricultural Society. The committee visiting Mr. Travice's farm filed the following report: "containing 85 acres with 55 under cultivation. He bought the farm for $33 per acre…with limited means, and his own personal and well directed industry, he has repaired and improved his dwelling…built one barn…tool house and horse barn…".

What makes Job Travice so important to Wayne County? Well, he ran a medium-sized farm for almost 40 years; was a life member of the Wayne County Agricultural Society; taught Sunday school in the Pilgrimport school house; was a noted horse trainer; and he was black.

Very little is known about the contribution of the blacks to settlement in Wayne County and it is only fair that we should know something about Job Travice, a respected member of the Wayne County farming community.