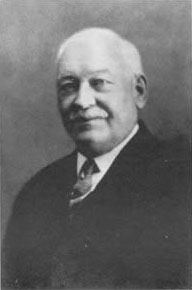 Jerry Collins was one of Wayne County's most colorful figures for over half a century. For fifty-one years, he served the county either as Sheriff or as Criminal Deputy, starting in 1883. During the fifty years from then until he retired in 1934 at the age of seventy-nine, he was well known throughout the area as a tough lawman, an able administrator of the jail and a man of great personal courage as well as charm.

While he was associated with the Wayne County Jail, nineteen men and one woman were convicted of murder; one of these was the first man electrocuted at Auburn Prison. In Jerry's charge were all sorts of felons who were arrested in the county and lodged at the Lyons jail awaiting trial and sentencing. Not a single one among hundreds of prisoners ever escaped during the time Jerry Collins was in charge.

All sorts of thrilling crime stories could be conjured up from studying the record books of the old jail and the courthouse. The most bizarre "case" absolutely unparalleled in the annals of crime, was that of Oliver Curtis Perry who was captured by Jerry Collins in 1892. Attempting to avoid capture following a train robbery at Jordan, Perry stole a locomotive at Lyons and was pursued by Jerry Collins who commandeered a faster west-bound express train. When Perry realized that his pursuer was gaining on him, he reversed his engine and shot past the express train who followed suit by reversing its engines! Back and forth several times between Lyons and Newark the two iron horses zoomed past each other. Finally, the dropping steam pressure caused Perry to abandon his locomotive. He ran across a field, stole a horse and cutter, abandoned that and took off on foot. Surrounded and cornered by Collins and his men, the desperate gunman, still armed had a gun battle with his captors before he gave up. This exploit was widely reported throughout the country. In all the accounts Jerry Collins' bravery is praised.

Many another tale can be told of the tough but kindly jailer. One of the most interesting collections at the Museum in Collins old jail is the sixty-odd items confiscated by Collins from prisoners during his tenure. These include guns, knives, daggers, burglar's tools, etc., - all identified and all described in a leaflet prepared at the time of Mr. Collins retirement.