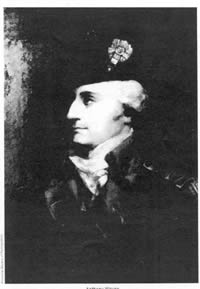 General Anthony Wayne, for whom Wayne County is named, was a hero of the American Revolution. He was a contemporary of Franklin and Washington and knew them both well. His public life spanned scarcely twenty years, yet in those twenty years he distinguished himself time and time again and became such a hero that nearly thirty years after his death our county's founders honored his memory by giving his name to the new county of Wayne.

It was upon the Revolutionary War Battlefield that Wayne came to be known as a national hero. Anthony Wayne was thirty- one at the outbreak of the Revolution. Upon the outbreak of the Revolutionary War, he collected a company volunteers at once, trained them and was sent to the Canadian border under General Sullivan. At one point he was in command of Fort Ticonderoga. In 1777, he was active in the campaign against Britain's Lord Howe under George Washington. Wayne's service to Washington was of great note, but Wayne's most daring exploit came at Stony Point.

In 1778, Anthony Wayne was sent by Washington to dislodge the British from Stony Point on the Hudson River. As a natural bastion, Stony Point was formidable. The fort was located at the top of a very steep, rocky hill, surrounded on three sides by water and accessible by land only through a marsh which overflowed daily with the tide. The fort was considered to be impregnable, but Wayne eagerly took on Washington's command to attack Stony Point.

There is a tradition of longstanding that when Washington divulged to Wayne that the purpose of summoning him was to have him storm Stony Point, Wayne impulsively replied, "General, if you will only plan it, I'll storm hell!" To this a comment from Washington has sometimes been added, "Perhaps, General Wayne, we had better try Stony Point first." It is maintained that Anthony Wayne earned the title of "Mad" when a soldier hearing Wayne say the above said, "The man is mad!"

Wayne made his assault upon Stony Point shortly after midnight on July 16, 1779. Previous to the attack, Wayne had taken security precautions so that the British would not be forewarned of the attack. The siege of Stony Point was successful and the impregnable fort was penetrated. For the victory, Wayne and his men received great praise. For Anthony Wayne, a gold medal and the thanks of Congress were granted. Anthony Wayne had served his cause well. After the war he returned to Pennsylvania and farming.

In 1792, he was summoned from his Pennsylvania farm by then President Washington to command a force against the Western Indians. On April 13, 1792, Anthony Wayne accepted the command of the United States Army which was then engaged in fighting the Indians of the Northwest Territory. The Indian Wars were an aftermath of the Revolution and essentially a part of it. It was thought that the British were encouraging the Indians to conduct raids against American settlers in Ohio Valley. The Indians were indeed hostile to the coming tide of white immigration.

It was on August 20, 1794 that the final battle to end the raids upon white settlers was fought. The Battle of Fallen Timbers as it came to be known, broke the Indians power in the Northwest Territory. The Battle of Fallen Timbers also shattered all hopes of the British to gain the Ohio Valley and Western lands and had insured the safety of the frontier territory including the territory south of Lake Ontario which has born Mad Anthony's last name for over 150 years.

With his mission to stop the Indian raids upon American settlers in the Ohio Valley complete, Wayne returned home. He never made it home, however. On the morning of December 15, 1796, sixteen days before he would be fifty- two years old, Anthony Wayne died. Among the intrepid leaders of America's fight for independence, Anthony Wayne was the spirited combat general who stood foremost for daring enterprise and hard fighting.

Whatever else may have led to the bestowal of his name upon our county at its organization on April 11, 1823, it was at least a just tribute of respect to his memory for the distinguished services he provided his country.