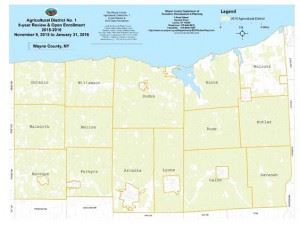 Agricultural districts were established to help protect and promote a farmer's opportunity to operate a successful business. Many people own property that was included in an Agricultural District as part of a farm when the districts were first formed beginning in the 1970s. There are currently about 10,500 parcels and 293,000 acres in the Agricultural District. When a landowner subdivides a parcel of land that is in the Agricultural District, all parcels remain in the District until they are removed by their current owner during an eight-year review. Since this is a voluntary program, you have an opportunity to remove your property from the District by marking and returning the Add-Drop form by January 31, 2016.

Parcels that are currently in Agricultural District Number 1